The infamous John Taylor meets the God of Creationism

(…)
“Hi there, sir and Sister! Good to meet you both! I am Chuck Adamson, the god of Creationism. Blessed be!”

I hefted Paul’s body into a more comfortable position and considered Chuck thoughtfully. “Creationism has its own god now?”

The new god smiled easily and struck an impressive pose. “Hey, if enough people believe in a thing…sooner or later, it will appear somewhere on the Street of the Gods. Though I have to say, if I see one more Church of Elvis materialise from the aether, complete with blazing neon and stereophonic cherubs, I may puke. A great singer, to be sure, but a fornicator and drug abuser nonetheless. We are a proudly old-fashioned, traditional Church, sir, and there’s no room in it for a sinner, no matter how talented.”
(…)

Chuck stepped in a little closer, and lowered his voice confidentially. “Come now, sir, you must understand that every new church needs a few good old-fashioned miracles to get it off the ground? You just spread the word, and the worshippers will come running like there’s a sale on. And before you know it, my humble establishment will be leap-frogging up this Street to better and better positions. Praise Creationism!”

“You can bring my friend back from the dead?” I said, fixing him with my coldest stare. “You can repair Paul’s body and return his soul to the vale of the living?”

“Ah,” said Chuck. “Repair the body, yes. The soul…is a different matter. A bit out of my reach, you might say.”

“So what you’re proposing,” I said,” is to turn Paul into a zombie and have him lurch about shouting Brains! Brains! while he slowly but inevitably decays?”

“Well, not as such…Look, I’m new,” said Chuck, a little desperately. “We’ve all got to start somewhere!”

“Bit late to be invoking him, Chuck. You’re the god of Creationism…That means you don’t believe in evolution, right?”

“Your belief started out as Creationism, but has now become Intelligent Design, right?”

“So your argument has evolved, thus disproving your own argument.”

“Oh bugger,” said Chuck, as he disappeared in a puff of logic.

“Nice one,” said Sister Josephine. “I would have just shoved a holy hand-grenade up his arse and pulled the pin. Heretics! Worse than fleas on a dog. His church has disappeared, too, and I have to say I find the pile of rubble that has replaced it rather more aesthetically satisfying.”

“He’ll be back,” I said. “Or something like him. If enough people believe in a thing…”

But Patrick O’Brien, the jury foreman, told a reporter later that an 11-member majority decided that Doe had in effect consented by being in the bar and dancing for the photographer. In a trial such as this one, agreement by nine of 12 jurors is enough for a verdict.
„Through her actions, she gave implied consent,“ O’Brien said. „She was really playing to the camera. She knew what she was doing.“

According to the information received from parents of the 71 cases, 30 could be identified as members of the Waldorf school or kindergarten, 18 as siblings of these members and 20 as visiting doctors who do not recommend vaccination.

The control of the vaccination certificates showed that 311 of 762 children (41%) attending the Waldorf school were not vaccinated against the disease or had not had measles before. None of the susceptible students attended classes.

Staff from the District Health Office had several discussions as well as conversations via email with parents who were concerned about the exclusion of their children from school.

Three children and one adult were hospitalised with fever and severe rash but they did not develop any major complications.

The school administration and the teachers were very cooperative in the organisation of the vaccination certificates control. However, the majority of parents indicated clearly that they disagreed with having their children vaccinated against measles. 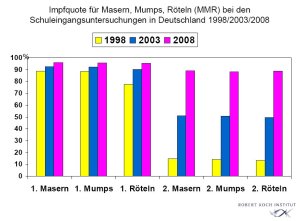